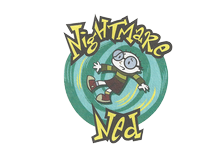 If you don't have any background/knowlegde about Nightmare Ned, Nightmare Ned is an American cartoon that ran from April 19 to August 9, 1997 produced by Disney.

The show revolves around the main titular character Ned who in most episodes has to deal with nightmares based on various fears or problems he has which all range from preparing for a school test to losing his baby tooth. The series was relatively short lived with only a 12 episode first season due to budget problems and creative differences. A cd-rom point and click puzzle game was also developed and released around the same time the tv show was airing, it generally follows the same idea as the tv show of Ned facing and dealing with various nightmares he has.

Having watched the whole series recently, Nightmare Ned is a hidden gem with really good 2d animation and voice acting especially for the person playing Ned, same could be said about the game with it's mash of 2d and 3d visuals. If you're a fan of dark quirky comedy horror or cartoons of that nature this would be a good quick watch especially for october/halloween, I'm currently attempting to try and emulate the cd-rom for myself to play but if you wanna see that just watch it here and here for the whole tv series itself.

Now that that's out of the way, the main focus of this analysis if it's not obvious to you by now is why I believe Ned Needlemeyer of Disney's Nightmare Ned cartoon is transgender.

Now obviously most of the evidence I am going to supply and be talking about can all be easily passed off as one off jokes or were simply unintended by the creators but I think what we can pick and see is atleast solid enough to atleast be convinced/intepret Ned as a trans boy.

Ned himself is a very simple character, Ned is generally a very anxious sometimes nerdish character who's worries tend to get the best of him in his nightmares, to say Ned is the show's general butt moneky isn't enough, this poor kid has like every fucking mental illness in the world but atleast in most situations he manages to atleast wake up or overcome said problem his nightmares are about. Sometimes it's kinda varied on whether his nightmares seem to have actually taken place in reality or are taking place in Ned's mind such as with episodes like 'Ned's Life As A Dog' or 'Abduction' but most nightmares happening tend to actually take place in Ned's mind and are all based on certain fears he has or problems he's faced with in said episode. Due to the whole show's theme being based around nightmares, they can go all out in depicting said problem as wacky and abstract as ever but one particular example I will be using is the episode 'Girl Trouble'

Girl Trouble is the 6th/16th episode of the show, the episode starts with Ned at school going into the school washroom only to have been pranked by the two bullies Conrad and Vernon into going into the girls washroom, after realizing the fact, Ned immeditaley starts panicking and runs out only to be met with said bullies and other passerbys who all proceed to taunt and make fun of him for entering the girls room. Ned is shortly comforted by a girl who has a crush on him and another girl that Ned isn't like "other guys" and that Ned himself is "different" and "sensitive", comparing Ned to a "delicate flower", Ned however isn't comforted over being told that and yells and runs out of school while repeating to himself that he's "not a girl" before falling asleep under a tree in which we are put into our nightmare scenario.

With that description of what starts off the main plot of the episode, you can already see where I'm heading to with this episode especially with what happens in the latter parts. This whole episode is basically themed around the "gender-bender" trope which while in most cases especially for cartoons is applied merely out of comedy means or for the sake of drama or plot, the way it's applied here in this situation intersects with it almost being a metaphor/symbolic of being transgender.

Continuing on, while Ned falls alseep it cuts to the sky with the two bullies Conrad and Vernon now as ponies asking presumbly either Ned or the viewer to help them pick up flowers for their enchated diary before laughing and flying off in which Ned now wakes up as a girl/feminine version of him. Angered over the situation Ned proclaims to stand up to them and in his words 'Be a man', while Conrad and Vernon are bullying a different kid, Ned confronts them both in which they at first dismiss Ned not recognizing it's him but when actually looking at Ned now, they are both immediately infatuated with this version of Ned. Ned obviously responds to their reaction confused about what they mean as well as them calling him a "pretty girl" before soon realizing from his new girl attire and through looking in a mirror that he is infact now a "girl". To cap it all off his teacher who gave him the mirror to check comments about how Ned is still a girl now but soon he'll in her words "blossom into a beautiful woman" which Ned screams and starts crying about, when asked what's the matter by a random man who calls him a "little girl", Ned starts getting defensive over it getting mad at said man for calling him a little girl and repeating over and over that he's a boy before stopping.

Stopping here once again before we really get to the meat/most convincing piece of evidence I can give for this. So far we can see it's been constantly established throughout the episode that being compared/told that he's a girl/in general not a boy upsets Ned greatly enough to start screaming and instigate a flight response from him. While once again I don't think the implication of Ned being trans was really intended/thought of and can simply be excused as a typical "ewww cooties eww girls" writing especially for a boy of Ned's age, it's not a stretch to say a lot of what's happened so far to Ned can resemble the struggles/frustrations of a trans person especially a trans kid who's going to go through puberty soon. From the washroom scene of Ned being made fun of/bullied for going into the opposite sex bathroom and people treating him different cause of that or Ned's defensiveness over being called a girl and insisting he is a boy even to a random stranger, I think it's especially interesting the use of phrases or words like "delicate flower" or "blossoming (into a woman)" used to describe Ned which are also often used by mostly adults when talking about puberty for young girls.

Finally in the biggest example I can show for this analysis, we cut to Ned's house with Ned's father calling him "Nedra" and how Ned's mom told him he was sent back from school early and how Ned thinks he's a boy. Ned responds back to his father that he is a boy and that his name is Ned in which his father tells him "ok Nedra... I mean Ned" Ned's mom proceeds to tell him to not worry and that 'all girls go through this phase' which makes Ned even more upset claiming that it's not a phase and that he is a boy before crying, his mom's only response being "whatever you say Nedra" Ned is then excused from dinner in which he walks into his room which he finds out is filled to the brim with stuffed animals and toys alongside his bed which is full of dolls on it. Upon seeing all the dolls, he calls it a "stupid doll" before knocking most of them off his bed and discovering a diary supposedly written by him. When reading the diary, Ned gets digusted over what he supposedly had written in it such as getting crushes on boys or shopping for girly dresses. Some time passes by and the two bullies from before throw a rock at Ned's window to get his attention while trying to "earn" Ned's heart, Ned rejects them but they only see this as Ned acting "fiesty" and see it as a challenge to win him over. No matter what Ned refuses only telling them to leave him alone, Conrad finally says that they'll do anything Ned wants them to do for him to like them to which Ned takes this oppurtunity to make them do embarrasing things like barking, wearing dresses or singing nursery rhymes. Throughout them doing all of this Ned realizes "the power of control" and how "women rule men, the world and the universe", Ned then skips while throwing flowers before exclaiming "I love being a girl" in which Ned soon wakes up to now find himself back to his regular self. Relieved by it, Ned opens up his diary and writes in "Dear diary, I just had the strangest dream, it made me feel kinda funny." before taking a sniff out of a flower and putting it in his diary before returning to school which is how the episode ends.

Starting off with the beginning of Ned being at home, the whole conversation with his parents over him being a boy is very reminiscent of how coming out as trans to family members can be like especially from a young age, while his parents aren't/don't act outright transphobic towards Ned they do spout ignorant rhetoric towards him calling it a "phase" and deadnaming Ned. Alongside Ned feeling uncomfortable and almost digusted at how "girly" his bedroom is or how girly he's acting/sounds in the diary pages, all of this plus what I mentioned earlier specifically of Ned acting very defensive over his indentity or being precived as anything but a boy feels like a metaphor for someone dealing with gender dysphoria and being forcibly gendered. The whole bully manipulation stuff is kinda a mix for me on this topic but I like to think that the ending scene of Ned picking up a flower and keeping it in his diary is Ned reflecting upon the aftermath of the bully sitiation in his dream and coming to terms with his relationship on femininity/being ok with it in the end.

While Ned was definitely not intended to be interpretated as trans, it's super easy to read Ned as transgender in some kind of way and I'm just surprised that out of a super obscure (atleast in disney standards) it's main character is really fucking trans coded and that's fun to think about.

This kid has 90 mental illnesses and is banned from most public areas and is transgender and there's nothing you can do about it.