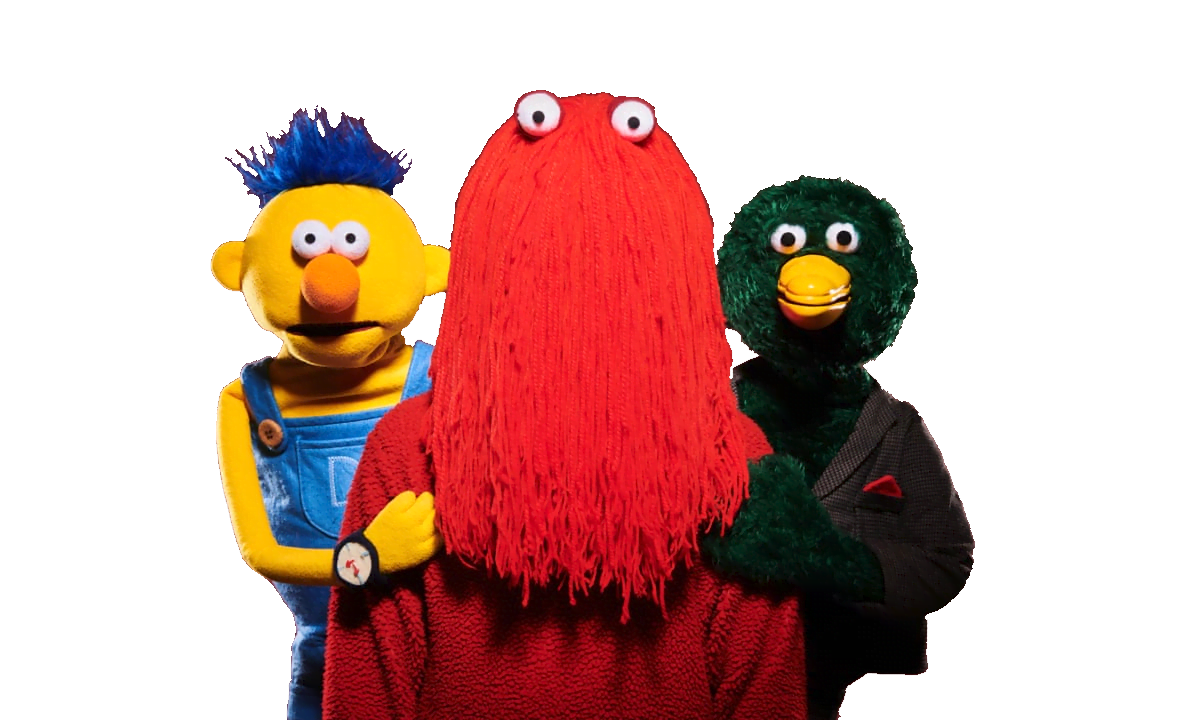 My personal theories/analysis of the horror webseries, Don't Hug Me I'm Scared.

Just my interpretations, notes and piecing together of characters or story of both the original webseries and the tv show. I'll try my best to treat both as seperate media in the sense that the tv show especially is it's own thing disconnected from the possible story being told in the webseries but I will occasionally reference them to each other. Everything here is just pure speculation.

And if you're unfamiliar with DHMIS, the original webseries is on youtube by the official channel and by using a vpn on All 4 or just searching for it you can find all episodes of the tv series. Be warned that DHMIS in itself has a pretty lengthy content warning list/depicts quite graphic scenes despite what the visuals would make you believe so be careful.

The trio's relationship towards each other

In watching the tv show and rewatching the original webseries, the main three characters we follow (who I will just be referring to as Red/Red guy, Bird guy and Yellow guy) are actually quite distant from each other. In the webseries as they don't speak a whole lot compared to the tv show where they have full on conversations, it's a little harder to really pinpoint their thoughts or opinions on each other beyond the three of them being a group who seemingly have "fun" or learn new things throughout the episodes. The only time we really have any indication on their relationship with each other in the webseries is in episode 3 where Duck guy and Red refer to themselves as Yellow guy's friends and the acknowledgement from both Duck guy and Yellow on the disappearance of Red in episode 5 and soon Duck's disappearance/"death" in episode 6. Now compared to the tv show, I think it's interesting how it's constantly reiterated over and over especially by Red that despite the three of them living in the same house, doing activities together and singing a whole ass title theme song about how it's just "the three of them", they are not actually friends or family, they're at best acquaintances and at worst completely distant to each other almost stranger like and if given the chance like in episode 3 of the tv show "family" (specifically Red) are willing to just leave in search for more familiar ties. However it's proven in episodes like the near end of episode 2 and episode 3 how they can't seem to even function without one another, with episode 2 having Red and Yellow sing a whole song number about remembering the Bird guy while completely remaking him/digging him up from the grave despite Red's earlier sentiment about how they and the Bird guy are not friends. Same case with the part in the family episode where Red guy finally gets to meet his supposed "real" family but is still unsatisfied and even more distant to them then they were with both Yellow and Bird. But even after acknowledging that all they really have are each other, their relationship never really develops or progresses past that. Especially considering how much their dynamic relies on the fact that they're a trio yet they share no interest in one another while all other possible ties they have are either non existent or absent. Just a bunch of people forced together in the same room for the sake of it. It's also interesting how in episode 2, Yellow guy is the first to activitely miss Duck when Duck "dies" and objects the idea of Stain replacing Duck despite all memories and interactions with Duck either being neutral or negative (Duck biting Yellow, making fun of Yellow's rash and actively insulting Yellow in episode 4), same with how despite how much Red opposes the idea of him being friends or family with Yellow and Duck, they and Duck seem the "closest" sending emails to each other, singeling Yellow out for being stupid and not to mention the whole "I like looking at you" line in episode 6.

The Teachers (and their relationship to the trio)

It seems that most teachers in both the webseries and tv show are off inanimate objects or animals with the exception of the very human twins in the family episode. It's also shown near the ending of episode 6 in the webseries that there are possibly millions of possible "teachers" of anything or any subject such as stop signs or gel and how they're all just possibly not being sentient/involving themselves to the group unless they're needed for a lesson to be taught. Even then it's shown in episode 4 of the webseries and possibly episode 3 and 5 of the tv show how teachers can also just be interrupted and for the other teacher to easily take over or even miss the oppurturnity to teach the trio. In the webseries it's constantly shown how the teachers of each episode can be either contradictory or ignorant to the subject they're supposed to be teaching to the trio, how what they're teaching are overly simplified to a ridiculous extent and pushing a clearly biased view on the topic. It's only till past episode 3 and 4 of the webseries where the trio (first Red with Colin the computer and later Duck with the food gang and Yellow with the lamp) actively refuse to take part in the lesson and sense that something is wrong, alongside how it seems that they remember their encounters with said teachers (with Yellow being upset over shrignolds appearance and acknowledging Tony the clock rapidly aging him in episode 6). This is also explored in the last episode of the tv show when Yellow guy gets his batteries changed and stops/questions the nature of these teachers barging in randomely and dictacting what they should be doing. It's also shown in the tv show multiple times that teachers can be injured/killed.

Roy is a very simple yet complex character relating to anything dhmis, there's so much mystery surrounding him and we don't really have much to actually make a full concrete explanation to his role or who he is. All we know is that Roy is Yellow guy's father who starts to appear in most episodes in both the webseries and tv show past the original pilot who's name is in the credits and is potentially antagonistic? A lot of stuff in both the webseries and tv show does tend to point that direction of Roy being the big bad of the franchise, however I think it's way more complex then that. It's established as well that Roy has produced some videos/shorts such as "Craig's big day out" and that he helped the webserie's production. How much control does Roy have over the world/dhmis, is he just as powerless as the main trio, is he merely a viewer keeping an eye on his son, what does Roy really gain from all of this. Unless we get more explanation or such I doubt we're getting the answer soon but it's interesting to think about.

Lesley is a character that was introduced by the end of episode 5 of the webseries and has a major role in the show in the final episode when Yellow gets his batteries replaced with newer ones and goes up to the basement to meet her. It's very clear from the end of episode 5 and the beginning and latter of episode 6 that she is possibly the main puppeteer behind all of this, the one behind the strings to say. How she acts especially towards Yellow is very interesting, her calm almost naturing tone when she's talking normally compared to when she raises her voice at Yellow at times or when she screamed during the narration of Yellow guy's dream of the neighbourhood when they got hit by the car. With that I think it's also very interesting the prominence of "mothers" are in the series from Yellow taking on the role as mom for the twin's family and Lesley's "you're not my son" moment kinda like how Yellow's dad Roy was a major part of the webseries. I also find it interesting Lesley's stitches on her face the I believe the implication that she as well is a puppet, could be wrong on that but still. Another thing I wanna mention which I innitially noticed when watching episode 5 of the tv show, I noticed in some iterations of the train's design, specifically the car version, Lesley's name is on the name plate. On first viewing when I noticed that I thought it meant that the train's name was Lesley till I found out it was hers instead, apart from the fact that it was labeled Lesley cause it's her property, it makes me think about what connection the train teacher and Lesley have.

It's shown how throughout the web series and show that Duck seems to be the only character who really "dies" or has an on screen death from both episode 4 of the web series when he gets gutted and eaten alive by anthro food cans and Yellow and in both episode 2 and episode 6 of the tv show, the former literally soley focusing on the fact that Duck is legally dead and burying him before Yellow digs him back up and Red recreates Duck through stain only for one of the two to kill the other at the end and the latter briefly showing a tv above what seems to be another Duck's dead body. It's revealed in that episode as well that Lesley keeps a cupboard full of Duck replicas under her piano in case of an emergancy and it seems as though that's the only cupboard she really has of replicas of the main trio. Does Lesley have something against Duck compared to the others which causes her to want to kill and replace him off the most? What are Lesley's feelings on Red and Yellow (more specifically Red) then seeing as though they do also get injured or such they don't actually "die" like Duck has.