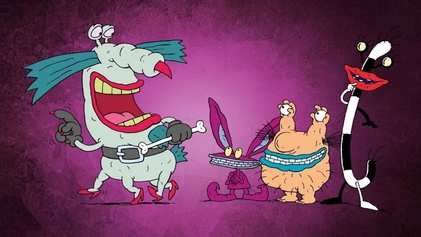 Aaahh!!! Real Monsters is an American nicktoon developed by Klasky Csupo that aired on Nickelodeon in 1994 which ran till 1997 with a total of 4 seasons and a snes genesis game. The show is based on a world where monsters exist and scare humans all throughout history, it follows the adventures of the three main characters, Ickis, Oblina and Krumm who all attend a monster school for scaring under a city dump ran by their teacher/headmaster The Gromble. The series is generally episodic, most episodes revolving around the main trio's school life and them performing their scares but other times certain episodes will either be character centric or about the world building which to my surprise this show has a lot of.

I actually have some history with this cartoon from a young age, I don't quite remember as much than some other experiences watching older 90s to 2000s era cartoons on tv but I vividly remember sequences in Aaahh real monsters where the main three were in their dorms either sleeping or talking and the episode pair "Super Ickis" and "The Subsitute".

It wasn't till august/september when I decided to watch the whole show with a friend due to peaked interest and I'm really glad we managed to finish the whole series after watching those two episodes I vaugely remember all that time ago to see what it was like. I can safely say that Aaahh real monsters is one of the few shows I've watched where I legitmately cannot point out a single thing that really pissed me off or made me really dislike anything about it, so for this october I thought it'd be fitting to go into my thoughts on this series and how good it is, if you're curious to watch you can watch it here and probably some other places online (torrenting, etc), I really do reccommend it if you're a fan of early 90s Nickelodean or somewhat halloween/horror comedy based cartoons.

As I said earlier, aaahh real monsters episodes and plots are relatively episodic in most cases and are pretty simple to follow, most environments we're shown in the show are mostly either the Monster academy and various areas within it such as the trio's dorm rooms or the gromble's lecture hall or outside the city dump in what seems to be san francisco.

Episodes tend to either fall into trio centric episodes or specific character centric episodes, the earlier of the two generally all follow Ickis, Krumm and Oblina at school or in the city or such to either scare, participate in school activities or fix an issue before it gets any worse while the latter tend to focus on one or sometimes two central characters and expands more on who they are (biggest example would be Ickis from both season 1 and 2 episodes). Occasionally in episodes like 'Where Have All the Monsters Gone?' or 'History of the Monster World', they focus more on the world building for the monster world and how it functions/affects the characters. Alongside that there are reoccuring characters who appear once or twice in episodes past their debut, the most prominent being Simon D Hunter, a self proclaimed monster hunter who takes the role as the series main antagonist in latter episodes.

Most episodes in the series are all generally well written and fun to follow, I struggle to really point out a single episode or scene that I didn't really like/hated at all, there are occasionally times where I feel like a certain plot point or trope being used feels a bit bland such as the misunderstanding/miscommunication trope used primarily in the episode 'She Likes Me?' where Krumm is convinced by others that Oblina has a crush/"Squish" on them but even then when it was used it was relatively handled well and didn't overwelcome it's stay.

Aaahh! Real Monster has a wide and diverse range of characters but I'm going to give a quick character run down of the most prominent in the series.

Ickis is one out of the three main characters of the show, they can easily be described as the "main" protagonist of sorts especially during season 1 and 2 where there were a whole lot of episodes centered around them. Ickis comes from a long line of famous loomers (an ability where monsters can grow in size), specifically his father Slickis who's legendary for his scares. Throughout the first parts of the show, Ickis can be described as very paranoid and skittish but later starts to act more rebellious and careless. While Ickis can do all kinds of stuff like looming and filling his eyes with blood, he's more often then not, mistaken for a cute bunny rabbit due to their large ears by humans.

Oblina is one out of the three main characters of the show, they are the "brains" of the group and is one of The Gromble's best students. She comes from a wealthy monster family who disaprove of her decision to be a scarer as seen in the episode 'Lifestyles Of The Rich And Scary'. Oblina is practical and disciplined but is often there for her friends Ickis and Krumm ready to help even when she constantly bickers with Ickis which starts happening a lot more in latter episodes. Oblina has the ability to shapeshift and pull her guts out, the latter of which is used a lot more compared to her shapeshifting ability, she can also stick her finger into an ear of a human to give them nightmares.

Krumm is one out of the three main characters of the show, while they're the most relatively chill and laid back member of the group, Krumm is a lot smarter than they seem. Krumm simply comes from a family of mold farmers, his father Horvak having once studied at the Monster Academy alongside Slickis who was kicked out due to bad grades. At first Krumm was hesitant on attending the Monster Academy and wanted to leave as seen in the last episode 'Rookie Monsters' but after having more experience scaring, he's shown to have lots of potential. Krumm has the ability to use his arm pit hairs and incredibly strong disgusting body odor alone to scare humans, they also rely heavily on using their eyeballs for tasks.

The Gromble was once the main antagonistic figure before becoming more of an anti-hero once Simon becomes the true antagonist as the show progresses. The Gromble is the main teacher and headmaster of the Monster Academy who goes by very strict rules and guidelines, most find them intimidating due to their harsh punishments such as snorching or being swallowed alive however Gromble really just wants to see everyone reach their full potential even if it's shown through tough love, they tend to favour Oblina more though as she's their top student. The Gromble's main iconic feature is their pairs of red high heels.

Some prominent characters who play smaller roles in the show

Simon D Hunter was introduced in the season 1 episode "The Monster Hunter" and thus became a reoccuring antagonist of the show, his main motive being to capture and expose the existence of monsters to human society everywhere, due to this belief and idea Simon is often ridiculed by most due to the absurdity of such a situation despite Simon being correct. Throughout the shows run Simon comes up with new plans to capture the crew, more specifically Ickis who he has the most run ins with, but alas he always fails. 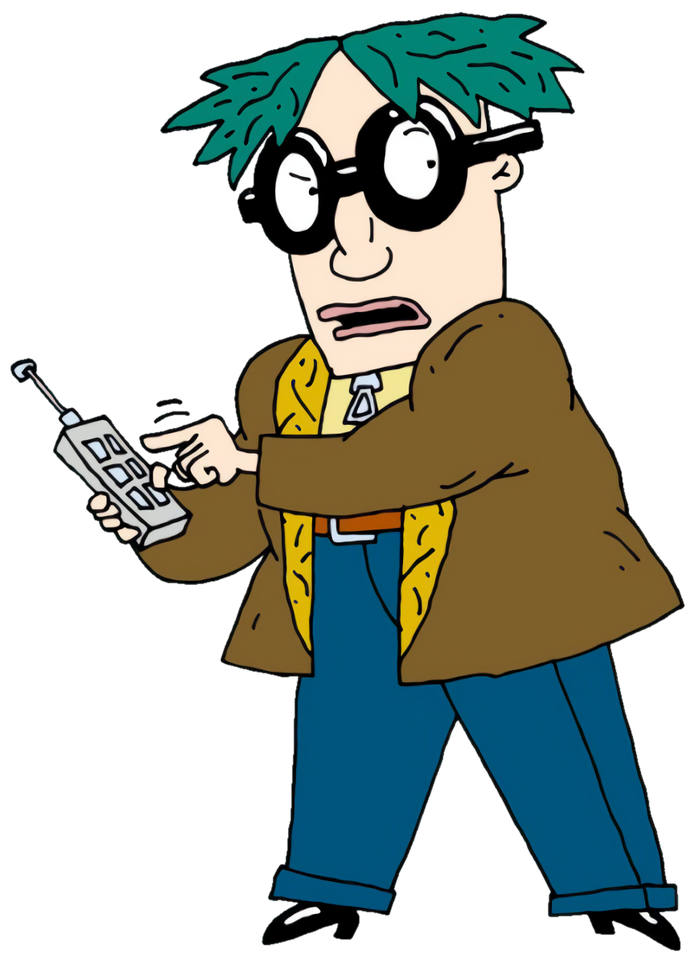 The Snorch and Zimbo are a prominent pair who are lackeys to the Gromble, always there to help in case of a snorching/punishment, while the snorch looks to be the more menacing of the two, he's actually quite nicer than you would think as shown in the episode "I Heard the Snorch Call My Name" when he gets a proper voice box and can actually voice his opinions. Meanwhile Zimbo is the more antagonistic and sinister of the two, actively trying to sabatodge and bother the trio, more specifically Ickis. It's also implied that the Zimbo intentionally misinterprets the Snorches grunts and cannot actually understand them. 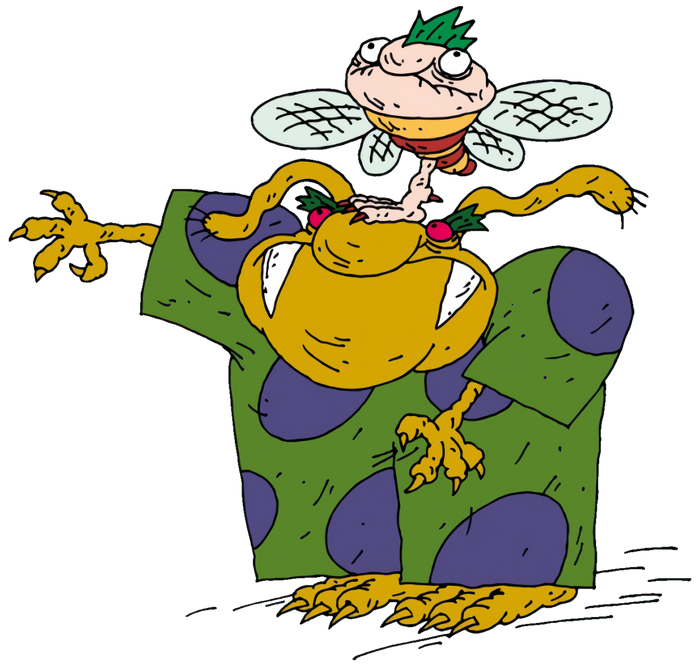 Slickis is the father of Ickis and is a famous historical scarer as was all his ancestors, this makes Ickis feel incompetent from having to live up to such a monster but in instances like "chip of the old block", Slickis is shown to care much for his son and even demonstrate times where he failed before to cheer Ickis up.

Horvak is another father figure of the main trio and is Krumm's father. Horvak is a mold farmer who used to attend the monster academy before dropping out cause of bad grades, he however did leave an impact on monster history when he attempted a scare but lost his eyeball through it being mistaken as a bullet in the first shot in the american revolution. Apart from that, Horvak is a kind monster who cares about Krumm.

Something just really pleasant to see was how they actually protrayed these characters in a fun and interesting way without having to rely too heavy on possible character archetypes the characters could've easily fallen into such as not making Krumm soley a dumb comedic relief or making Oblina too uptight which I admit still somewhat happens in the latter seasons but it's not heavy flanderization bad. Characters for the most part stayed consistent.

World building and the art style

I have to once again reiterate how much I wasn't actually expecting this show to have story driven continuation especially of the world they set up, the lore and worldbuilding is plentiful and interesting enough to actually have stakes and impact on the world and characters but also easy to digest and up to interpretation enough to leave the viewers who really want to think about how other aspects of the world work and fill in the blanks themselves. The world of monsters and the monsters themselves are very interesting and unique with how they handle the reasoning why monsters have to scare humans or why they exist or things like mythical cryptids/monsters etc and I fully believe the classic Klasky Csupo art style really elevates the world and the story. A lot of people tend to comment on how "ugly" or visually unappealing Klasky Csupo cartoons are and while there is a completely different discussion about what really makes a cartoon "ugly" looking, for a cartoon like this that's main world and setting relies on how "ugly" it is it's works out great, and even then it doesn't border too much on being unbearable or hard to sit through and there's surprisingly less gross out than I expected/gross out is generally tolerable and feels fitting for the setting and characters to be like. Character and set designs are also just generally appealing and one of a kind especially for the monster designs and their abilities, it really just nails the whole monster aesthetic.

I just wanted to show these off at the end man.